Does it still make sense to donate to Indian NGOs? A reflection.

“The (Indian) Home Ministry has decided to restrict data on the registration status and financial dealings of individual NGOs and associations registered under the Foreign Contribution Regulation Act (FCRA) from public view.” Times News Network, India.

What does this mean or imply? Let us first see what the FCRA is about. It is about NGOs in India declaring to the Home Ministry their income from foreign sources and their utilisation in India. A good system by any standards, especially for a country known for its corruption (India ranking 85 out of 180 in the “Corruption Perceptions Index”, somewhere between Belarus and Ethiopia).

Here is what the official FCRA website says: “The foreign contributions received after prior permission or permanent registration under the Act are to be utilized for the purpose for which they have been received. These are not to be invested in any speculative investments including Mutual Funds or share markets. However, foreign donations may be utilized for self-sustaining activities which is not meant for commercial activities.” http://www.fcra.co.in/fcra-funding.html 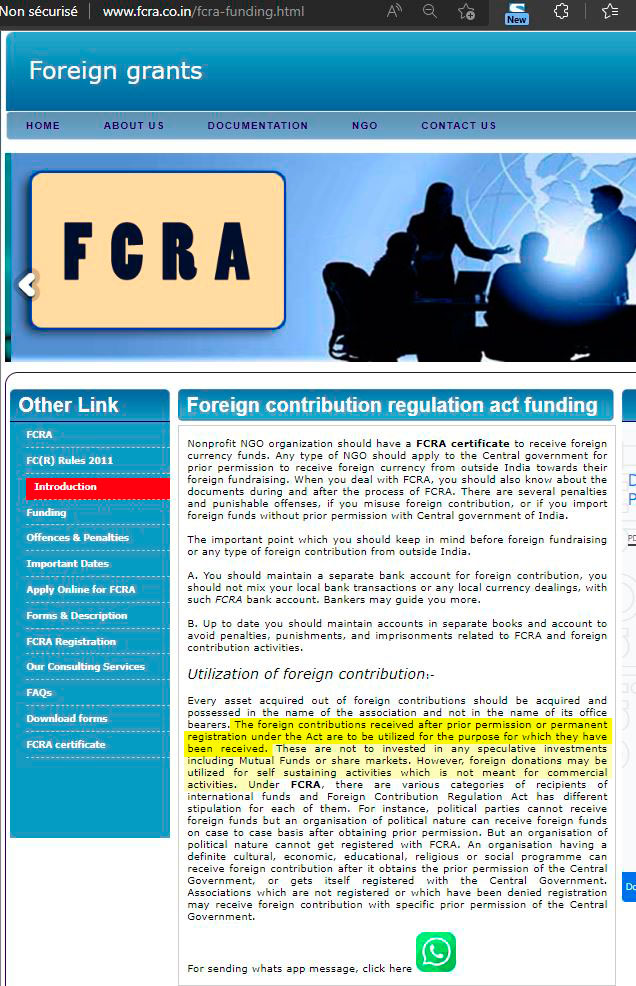 Did the Amrita Org respect those core principles? Do have a look at this fascinating and revealing documented analysis of the Org’s foreign income declarations between 2006 and 2019. This chapter of the book “The Amma Empire” has been made public on its dedicated website at the following page https://theammaempire.com/excerpts/fcra/. Could the present decision of the IHM be a consequence of the book’s revelations on the organisation’s unethical handling of foreign donations?

Whatever the case may be, this blank check from Indian authorities making national civil society NGOs officially unaccountable to the public, is rather disturbing and worrying, coming from a country priding itself of being the world’s largest democracy and the birthplace of Dharma. This decision definitely stands out by going out of line with international standards.

While the Indian Home Ministry may think it is “their” business to decide how national NGOs report to the public how they see fit, the question “we” should ask ourselves internationally is, under the circumstances, taking into account this blatant lack of public accountability, should one still donate to Indian NGOs? Each of us will make their own decision.