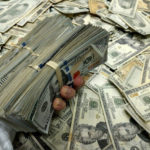 Highlights of my report on FCRA declarations between 2006-2019

PDF version in the archives page

This text is the synthesis of a 30-page analysis based on a workbook with 60 interconnected spreadsheets, available in the archive. Enthusiasts are most welcome to take up this work, enhance it, complement it or even correct it if need be. 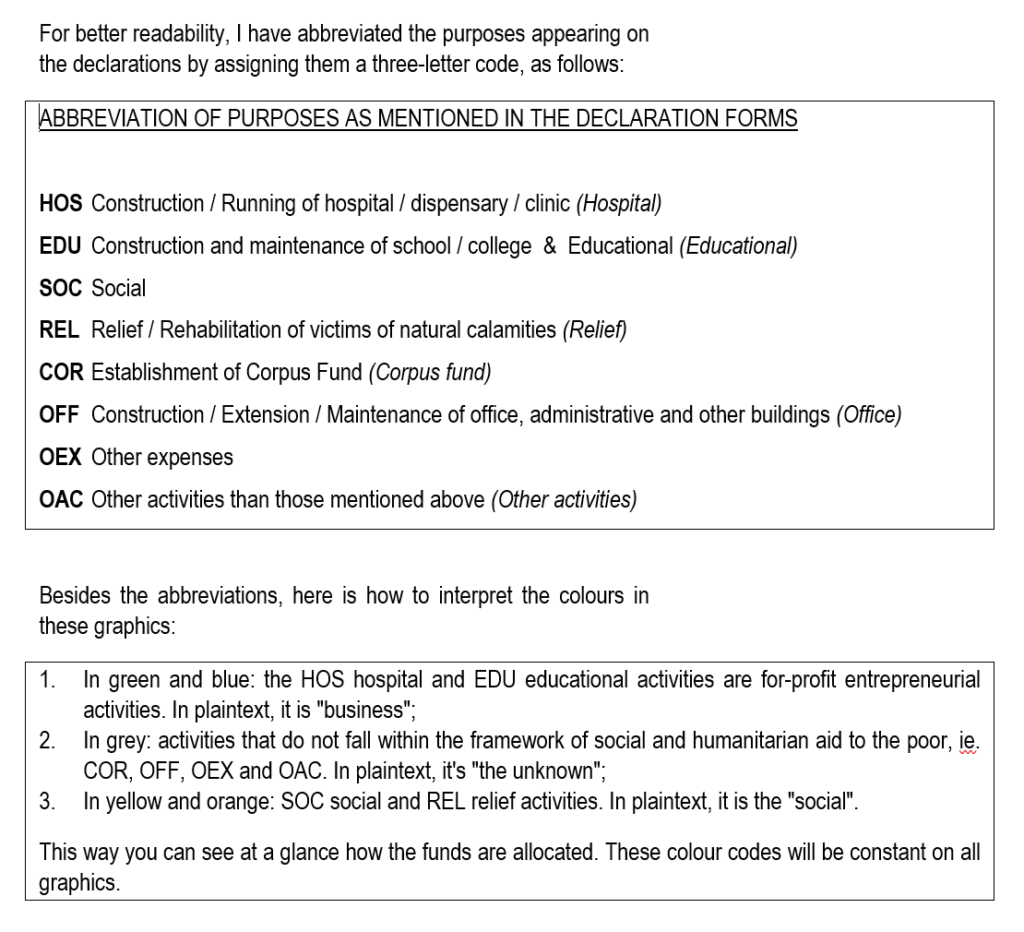 On the left, you will find the funds received and how they were allocated, and on the right, how these funds were used, “if applicable”.

We are looking here at the “figures”, not at the promotion and complimentary propaganda figuring on the organisation’s websites and the advertising brochures shown during the programmes in the West.

Obligations of NGOs and the reality of the organisation

The organisation may have acquired consultative status with the UN, yet it does not seem to have assimilated any of the founding principles of international organisations such as good governance, transparency, accountability, independent auditing and evaluations, respect for ethics and procedures.

The rather sober, less brilliant, even rather cynical reality is the following: on the one hand, $130 million are declared collected from abroad for charity, on the other, only 4% of this amount is used in the field for charitable purposes; 41% of the remainder is used in building an entrepreneurial empire and 55% is banked to generate millions of interests. In other words, when you donate $100, $4 will go to the field, $41 will be for business, and $55 for savings. Call it, fraud, call it deceit, call it breach of trust, misuse of donations, embezzlement, donations harvested under false pretences, whatever you may call it, this is so huge that it defies understanding!

“Let us think about all those devotees who feel ‘loved’…” Gail told me recently, “if that “love” were genuine, would she not return it to them by respecting and honouring their gifts and truly using them for charity, without betraying their trust?”

Not to mention that if she was able to build her entrepreneurial empire allowing her organisation to live comfortably today from its national income, it is thanks to the money of Westerners, thanks to these funds that she received in love and trust and which she used, dare we say, in disloyalty and dishonesty.

So, let us stop foolishly repeating baseless rationalisations and justifications and let us just face the figures: the rate of the institution’s deceit is 96%! But as we know in this world, the greater the shenanigans, the more inconspicuous they are. However, the deception here is much more perverse because it instrumentalises the emotional, love, the heart, the spiritual and all that is noble, towards which people aspire all their life. To deceive the very same people it claims to serve, by affecting both ends of the chain: on the one hand, the devotees seeking love, acceptance, enlightenment and on the other, the destitute, those in misery and in poverty in whose name she goes fishing in the pockets of working people.

The organisation’s websites are highly promotional, there is no mention of accounts anywhere. Small anecdote: many years ago, during A.’s visit to Paris, I had brought her the annual report of the “Restos du Cœur” (a French charity feeding the destitute) that I had received in the mail. It was an A3 sheet folded in two with four pages of report, accounting, graphics with figures and percentages. This type of report is a common practice. I presented it to A., and I argued that this form of transparency would facilitate fundraising by improving the credibility of the institution. Without commenting, she handed it to Balu, 002, director of the institution, who was present at the time. The latter took it with disdain and without uttering a single word, put it down somewhere as he left the room. End of subject. 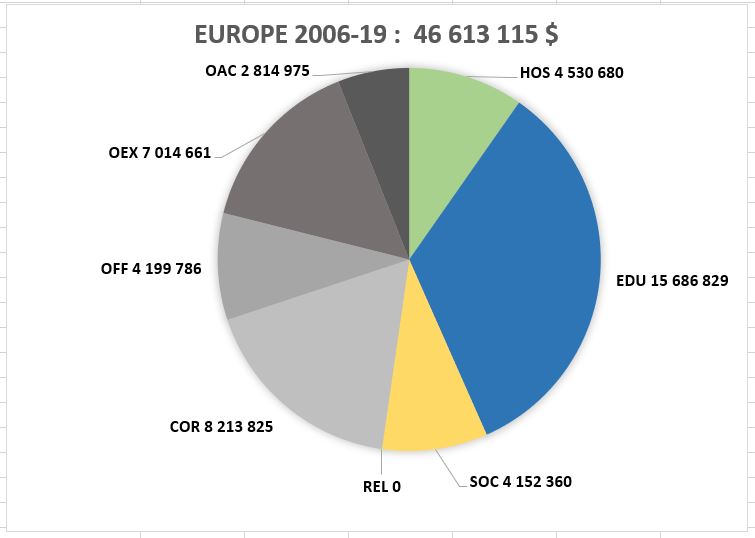 The world of international organisations, humanitarian organisations, NGOs and the UN is an environment that I know well, having worked in it for twenty years in Geneva, among others within MSF Switzerland (Doctors without Borders), as well as within the ICRC (International Committee of the Red Cross) in Geneva. By way of comparison, a few years ago, MSF Switzerland prided itself of devoting 78% of its fundraising to project beneficiaries, given that such an organisation has much higher operating costs than the institution of A., if only in wages. Even the ICRC, with a different governance and a near-diplomatic status, devoted 56% of its $2 billion budget to the field (and was also reprimanded by the Swiss Confederation, this percentage being considered too low). MSF and the ICRC, given their size, are exceptions here. At MSF Switzerland, there were 200 employees in Geneva and 2,000 around the world. At the ICRC, there were ten times more, at headquarters and around the world. That is a lot of payroll. As a general rule, for smaller NGOs, the standard expectation is that 80% of revenue minimum should go to the field. According to some institutional donors, this requirement can even go up to 88%. An NGO that devotes less than 80% of its funds to projects in the field would be publicly criticised and would no longer be funded. Not to mention that if an NGO received funds for one purpose and used them for another, institutional donors would demand the reimbursement of funds and blacklist the organisation. Moreover, the State would cancel its status of public interest and tax exemption! One has to admit here that the institution of A., is capable of a unique tour de force in the world and even more, neither the donors nor the States are raising any questions.

In my analysis report of declared foreign funds, we will find, as already mentioned, the details of what each of the affiliated organisations (other A.-Centres and A.-legal bodies around the world) transferred to the parent institution in India and with what purpose. Here are some examples of what can be found among the twenty affiliated organisations on the European continent. It should be noted from the data that out of the $46,613,115 collected in Europe for the period between 2006 and 2019, nothing seems to have been collected in the name of emergency relief (REL). Let us see some examples of the total funds sent with their allocation:

From these figures, one can see what affiliate organisations have sent / how funds sent have been allocated by the parent organisation, such as:

Here are the total amounts received in Europe from affiliated organisations and their distribution according to the declarations:

Same thing for the USA and Canada: 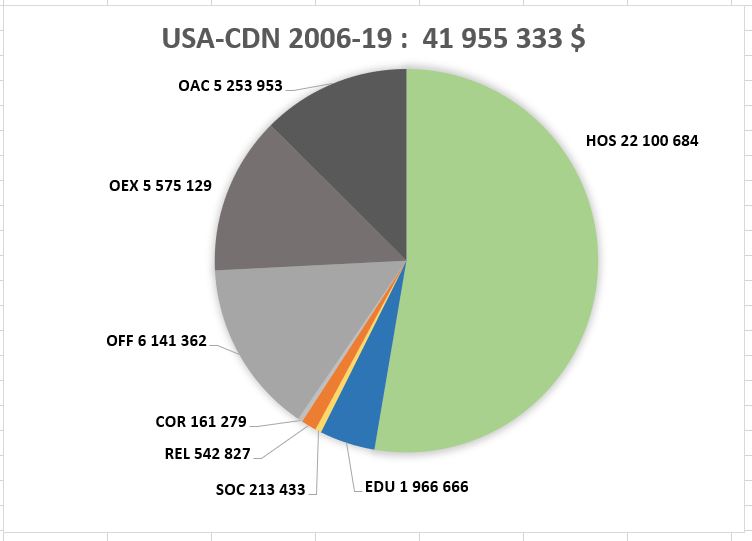 Same thing for the whole world: 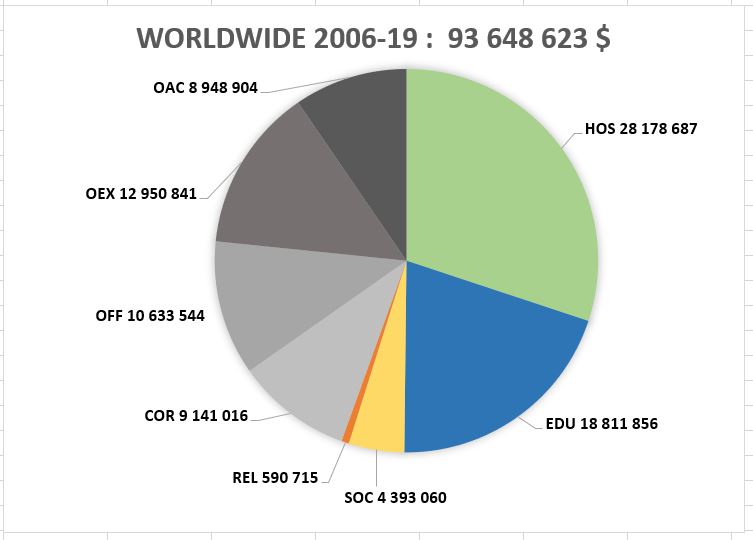 In each of the pie charts, the grey areas are of similar size. This will not be the case with regard to individual donations, as will be seen below.

Aside from this $93.6 million from affiliate organisations, $76 million were donated by other independent organisations and businesses.

Here is how the donations collected from individuals around the world, and declared (because they were paid into bank accounts), were allocated. This is $17.6 million over the same period (except 2007 and 2008 when the individual donations were omitted from the declarations – one can only wonder. Why wasn’t this picked up by the authorities? It is therefore eleven out of the thirteen years from 2006 to 2019: 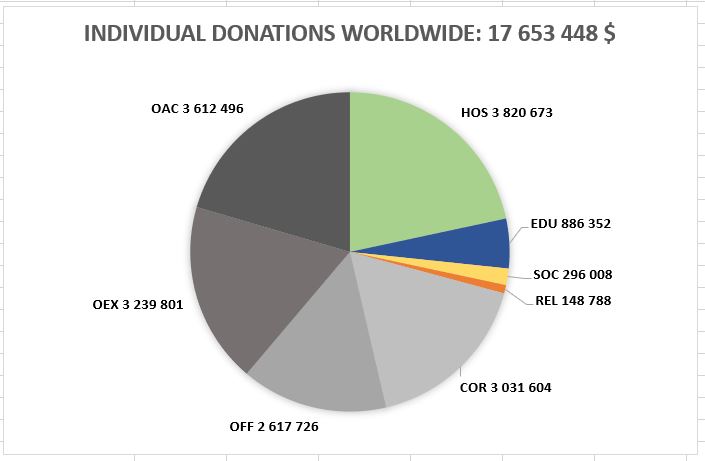 You will find the same thing here, represented in percentages. The purposes are listed on the left; regions of the world on the top: Europe, United States and Canada, Asia, Middle East, and the world, representing the total. 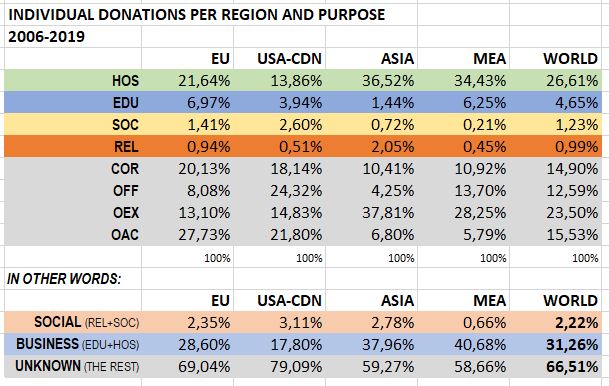 The colour codes are the same. The bottom three lines summarise the table. The figures speak for themselves: only 2.22% of individual donations were allocated to social and humanitarian purposes. In other words, in the period that concerns us here between 2006 and 2019, from your personal and individual donation of say $100 for A.’s charitable works, only $2.22 was dedicated accordingly. The remainder, namely $31 was devoted to strengthening the entrepreneurial activity of the organisation and $66 was either spent on behalf of “other expenses” or on other unknown activities, or simply invested.

Speaking of individual donations, here is an overview of donations over $10,000 and their allocation: over the thirteen-year period, 286 people gave $6.9 million, some up to 150, 250, or even 400k. The graph shows how these donations were allocated: 5% in social (including 0% in relief), 25% for business and 73% for purposes such as other expenses, other activities, construction of offices and endowment funds. This is the worst chart of the lot: a predominant amount of grey… 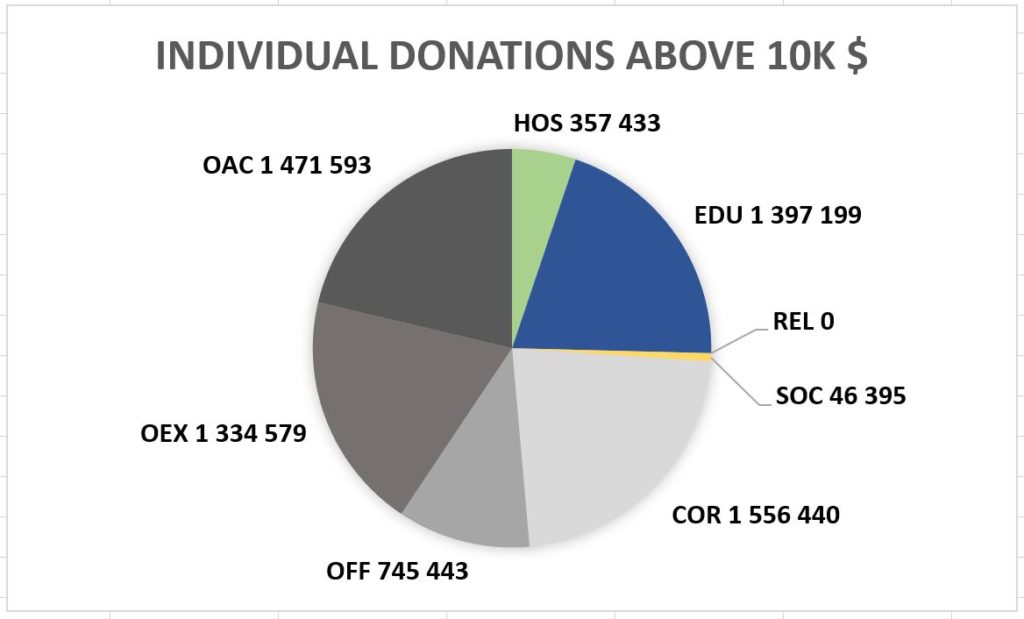 You may still have reservations and wish to assume that health and education facilities are part of the charitable activity. Even if this were the case, look at the contrast between the coloured and grey parts on the charts. Though this would improve the image, the bulk of the problem visible to the naked eye would essentially remain the same. Namely the massive appropriation of donations for purposes other than the stated social and humanitarian objectives. THE END.

[2] Indeed, funds received for a goal X can be spent for a goal Y, without relation between the two. I am not talking here, for example, of allocating funds collected for flood victims and devoting them to drought victims. No, as we will see, these are often funds raised for “humanitarian” purposes and used for “entrepreneurial or savings” purposes.

It all depends of course on how this fund is used. Considering the lack of transparency of the declarations of this organisation and the way funds are managed, reservation is recommended.

[4] Moreover, the team from Embezzling the world finds discrepancies between the declarations of the Californian MA Center with the FCRA declarations of the organisation in India. The US Center declares millions of dollars as donated, when the MA Math FCRA form mentions 0 dollars received. The team invites every Center in the world to do the same consolidation. https://embezzlingtheworld.blogspot.com/2015/01/financial-discrepancies-between-indian.html