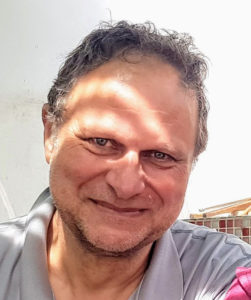 Jacques Albohair, French cum Swiss citizen, travelled to India, sometimes overland, yearly since the early seventies. This is when he met various masters and lesser-known yogis and his spiritual endeavour took a more definitive turn. In the late seventies, he had settled in India and was living the life of a spiritual aspirant. A few years later, he met Amma, the Hugging Saint, and decided to strengthen the devotional aspect of his journey with her. He was with her and a few early disciples even before an ashram or an organisation existed. With the others, he studied and practiced, but also spent all his time studying various religions and their mystics. Until some five years later, Amma sent him back to Europe to let her be known, to lay the foundations for her work and for her visits, and to hold together a string of groups of seekers and devotees in various countries. He organised her tours in Europe and when she visited, he was her interpreter. He served this way eight years until he strove to return to normal life as a layman. Notwithstanding the stir this provoked, he continued his service on a smaller scale before finally quitting a few years later.

After a period of personal, social and professional reconstruction, he settled in Geneva, Switzerland, and worked in the environment of NGOs and international organisations in the realm of development and humanitarian aid for nearly twenty years. Now retired, he continues to devote himself to those activities, albeit on a smaller associative scale. See Ushagram Suisse for more.

Having shed all formal and external forms of involvement in spirituality, his inner journey continues by letting its core principles find expression in his everyday life. “The Amma Empire” was written more than twenty years after having quit his ex-master and her movement, which gives a dispassionate and clear quality to his testimony.

You are welcome to contact me in relation to this book. Testimonies and other contributions are also welcome. If you should need to express yourself in disagreement with the “contents” of the book and wish your message to be considered, please be civil, specific and constructive.

If you wish to stay informed