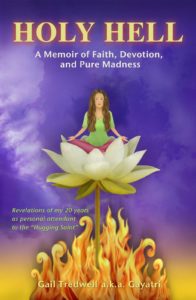 Back in 2013, when Gail Tredwell came out with her testimony, it sounded like a lonely voice in the vociferous crowd and she was an easy prey to denigration and humiliation.

I always felt I needed to support her testimonial but I didn’t feel ready to start with mine. Nine years later, I have fulfilled my wish to be loyal to her voice, loyal to myself while speaking out the truth of our knowledge and our experience, our understanding of our ex-guru and her movement.

I have known Gail for more than forty years, in Tiruvannamalai, from even before we met Amma. Then we lived together with Amma from the very first moments of history. Gail had settled there a few months before me. Later, when I was sent back to the West for teaching, we often talked at length during Amma’s visits in Europe, as well as during my annual visits to India. I have followed her development, especially since the moment she experienced growing difficulties reconciling her faith with her actual experience. She needed an ear, a different voice. She confided more and more in me until my separation from the movement. I lost contact a little afterwards, which meant that I did not closely follow her retreat period and the preparation of her escape. It was afterwards, from her island in the middle of the Pacific Ocean, that we reconnected. We have kept in touch ever since and have spoken regularly, particularly of course whenever there was a significant event following her book publication.

When writing her testimony, Gail was not, as she wrote herself, in a process of revenge and reclamation. For her too, respecting herself implied accepting to speak out. This work, I know in my heart and soul, is painful and rigorous. She did a brave job. She had nothing to gain from it – except her personal reconstruction, the healing of her self-esteem, of her self-respect, of her life and its experiences, of her beliefs, of her convictions, of her commitment, of her person as a whole and therefore of her integrity. Doing such work after so many years, and we must pay homage to it for that, did not happen by chance but was the fruit of more than a decade of inner work.

When I read her book, I was touched by its sincerity and candour. Here is a woman who dreamed of being able to serve a female spiritual master, a desire which arose in her while reading the biography of Mā Ānandamayī, the bengali saint, with Didi, her personal assistant. Gail’s story is a fairy tale that led her to make her dream come true with Amma. She devoted her breath of life, her physical and mental health, her heart and her body, and even accepted going through various forms of abuse in her striving to be true to her inspiration, struggling against all the difficulties and obstacles in her path, determined to uplift her soul, to serve and to love. All of this, well beyond anything that could be considered reasonable, believing beyond belief, holding on to every fibre of strength and hope that was left in her in the worst of times, remaining perfectly honest and faithful to her ideal, to the one she loved and to those who loved the one she loved. Up until she realised, on the verge of physical, nervous and psychic collapse, that despite her incredible perseverance, offering her life this way no longer made sense because she was effectively only destroying herself. It was indeed towards the end, when she finally distanced herself and needed a retreat, that she realised that even though she continued to love Amma, she was beginning to differentiate between loving her ideal as a teacher and loving her executioner: “My entire world was slowly but surely crumbling to pieces, and yet this fragment of distance made me realize that I still loved her. I loved her even if what I loved was more like the person, I originally believed her to be. This realization added a new element of torment to my growing desire to flee the ashram.” (Holy Hell, ch. 22, p. 328)

Gayatri was a model for all of us, even for the earliest disciples, an inspiration, a shining example of dedication, service, love, self-sacrifice while keeping a sharp and solid common sense, a good experience of the human, an indomitable sense of humour and self-mockery, and the self-confidence of a sturdy Australian who could stand up for herself. We, the male members of the first circle of disciples, knew perfectly well what it cost her to serve Amma that closely. Basically, all we felt was respect and sympathy for what she was going through. She had no real support in the face of the systematic mistreatment that her master made her suffer except, of one person, Balu, later Swami Amritasvarupananda, who unfortunately also turned out to be an persecutor of another kind. Unfortunately, her master did not seem to recognise the many signs that her breaking point was imminent. When there was nothing left to save for Gail, and she escaped from her hell, it was a total shock for Amma and those around her. She was inconsolable, so were her spiritual sons. Gail’s departure was experienced as an enormous loss which left a gaping void behind her. But it was too late. The damage had been done and accumulated for years, beyond what any normal person could ever bear. Some of the ex-brothers considered her perseverance beyond imaginable and as utterly heroic.

Then came the slander campaign against her, of which I give details in the book in ch. III.6. For twenty years, you let someone serve you personally, more intimate and more confident than your own mother, you let her co-manage the ashram, then from one day to the next, you slander her and make the world believe that she is sick, petty, revengeful and profiteering. Make sense of this if you can!

Amma lost in Gail a key element of her message to the world. The example that Gail represented was beyond all discourses. It is true that she was not free from faults. But whoever is, throw the first stone! In many ways, none of us from the first circle of disciples could ever have come close to her.

Experience more in my book!

And do read hers! The link to Gail’s book is in her blog: https://gailtredwell.com/